A Journey to Truth and Reconciliation

And any man who knows a thing
Knows he knows not a damn, damn thing at all

I often think of this lyric from K’naan’s “Take A Minute”. The concept is as old as Socrates, but there’s something about his underlying beats and the rest of the song that gives this line additional remembrance for me. What it means to me is the moment you think you have something figured out is the moment you’ve stopped trying to figure it out.

I remember watching “Black Robe” first in high school and then again in university and feeling uneasy with the story. The idea of Jesuits bringing western enlightenment to Indigenous people was a common story in our history classes and Canadian art. It built upon the “man vs. nature” narrative that makes up so much of the foundation of Canadian culture. But as the titular character makes his journey into the wilderness it is not him versus the elements. The Indigenous peoples are a constant presence – good and bad – and they do not appear to face the same struggles he does with the land. This film is not their story, but even at this young age, I knew there was more to the story than I could grasp or that was being shared. 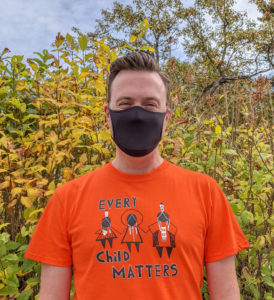 I have had the pleasure throughout my career in the public and non-profit sectors to meet and learn from many Indigenous people, some of them elders, some of them younger than I am, and I was often reminded that there was a whole world – a completely different way of knowing and being – that I was only barely being exposed to.

It’s embarrassing to say, but despite the Truth and Reconciliation Commission of Canada, the National Inquiry into Missing and Murdered Indigenous Women and Girls and the Idle No More protests, it was really the advent of the territorial acknowledgement that so many groups in our non-profit sector adopted before their events that made me take a deeper look into the messages of these groups. I began to see that despite being a huge history buff (social studies was my favourite class in school) I didn’t know “a damn, damn thing at all.”

I learned about the Holocaust in school, but I had next to no idea about the depths of Canada’s very own genocide. A genocide that, while perhaps slowed, was still ongoing. There’s a line in Will Ferguson’s book “Why I Hate Canadians” (he’s a satirist as well as a novelist) where he states, “The great themes of Canadian history are as follows: Keeping the Americans out, keeping the French in, and trying to get the Natives to somehow disappear.” The casualness of that last line really underscores how ambivalent Canadians have been about this central part of our history. I am ashamed of how little I knew while it happened in my country, in my lifetime. I am of the age that my peers could have attended a Residential School. None of this is ancient history. Most of it can’t even qualify as history by most people’s standards. It’s the present. It is today.

Full credit goes to Reg Crowshoe, a Blackfoot elder, for really opening my eyes. As part of my role at the University of Calgary for the past several National Ingidenous Peoples’ Days (June 30) our team has produced Campfire Chats in partnership with the Calgary Stampede. It’s at the 2018 and 2019 events where Reg, and other elders, shared their first-person accounts of growing up on a reserve and attending Residential Schools that I became most aware of why we call them “survivors.” The two stories I remember most drew a straight line between their experiences at Residential School and why they never hugged their children and why so much of their language has gone missing. It didn’t take a lot of thinking listening to these stories to understand what “intergenerational trauma” means. They are heartbreaking stories that more people should hear.

Seeking out truth like this, to me, is what National Truth and Reconciliation Day should first and foremost be about. I have purchased my orange shirt from Trellis Society and I plan to attend as many of the University of Calgary’s events as possible. There is no shortage of groups partnering with Indigenous groups to offer educational programming. No matter where you are in your truth-seeking journey I hope you will seek out at least one opportunity to learn more. Far too often we focus on the reconciliation part of truth and reconciliation. I know we all want to make “it” better, but for today, I hope you all will join me in admitting K’Naan was right and we “know not a damn, damn thing at all.” Truth must come before reconciliation.

Once we’ve started to learn only then can we start to work on reconciliation. And this is where I want to give kudos to the Calgary Aboriginal Urban Affairs Committee for producing the City of Calgary’s White Goose Flying Report. I’ve been part of UCalgary’s ii’ taa’poh’to’p and United Way of Calgary’s Akak’stiman and Natoo’si initiatives, but, without taking anything away from those, the White Goose Flying Report is the best truth and reconciliation document I’ve seen. Not only did they do a deep, deep dive into the TRC and the City’s services, but they produced a document that could practically be used as a step-by-step guide to reconciliation for the City of Calgary. As a City Councillor, I commit to ensuring this document does not sit on a shelf gathering dust. I will call upon my colleagues to insist on regular updates to ensure meaningful progress is being made. CAUAC put too much work into creating something so helpful for it to ever be forgotten.

As you and I progress on our Truth and Reconciliation journeys, today I invite us to heed the message of The Halluci Nation (formerly A Tribe Called Red) song with Shad called “How I Feel”:

It’s hard to listen, but listen
Cause it’s much harder living it than listening to the hardships
Still the heart’s conditioned to condition the air
When they air their conditions,
Keep cool But the more tears, sometimes the clearer the vision
Now what I see, been a long time coming

All the best from me to you as we observe Canada’s first National Day of Truth and Reconciliation.